Summer Sundays and Bank Holidays until 17th October 2021
Download timetable here (PDF file)
We are sorry that this service is no longer able to run via the Trough of Bowland due to a building work near Dunsop Bridge and in Slaidburn.
​It now runs via Bentham and Ingleton, providing new direct links from those places to Malham.

Malham DalesBus 881 runs from Lancaster via Ingleton to the popular railway town of Settle. After meeting the train from Leeds, Keighley and Skipton the bus climbs over the moors past the National Nature Reserve of Malham Tarn, to the pretty village of Malham, a popular walking centre in the Yorkshire Dales National Park. The village is surrounded by a dramatic limestone landscape of scars, cliffs, crags and waterfalls, including Malham Cove, Gordale Scar and Janet’s Foss.

Malham DalesBus 881 connects at Malham with Cravenlink DalesBus 884 from/to West Yorkshire and Skipton
and at Settle with the train from Leeds, Keighley and Skipton. 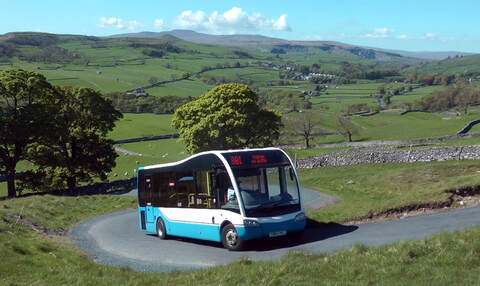 ENCTS concessionary bus passes are not valid for free travel on Malham DalesBus 881.
​Passholders pay a maximum fare of £3 single or £5 day return.

Malham DalesBus 881 is managed by Dales and Bowland Community Interest Company
​with financial support from Northern's Seed Corn Fund via the Friends of the Settle Carlisle Line.
and operated by Kirkby Lonsdale Coach Hire 01524 733831

dalestravel.info and dalesbus.org are provided on behalf of Dales and Bowland Community Interest Company.
​Please help support the DalesBus network with a donation via Local Giving.
Please check all information before travelling - no responsibility can be accepted for errors or omissions. Changes may happen without notice​.