All Aboard! The Country Bus

In 2016 BBC Four broadcast a slow television special, All Aboard! The Country Bus - a two-hour bus journey through the Yorkshire Dales; an opportunity to sit back and appreciate the sights and sounds of the beautiful Yorkshire Dales in a rich and absorbing antidote to the frenetic pace of modern life. The programme was broadcast on 29 August 2016 on BBC Four, attracting almost a million viewers. Click here to view the 30 second trailer.
​
Unfortunately the programme is no longer available in full online. 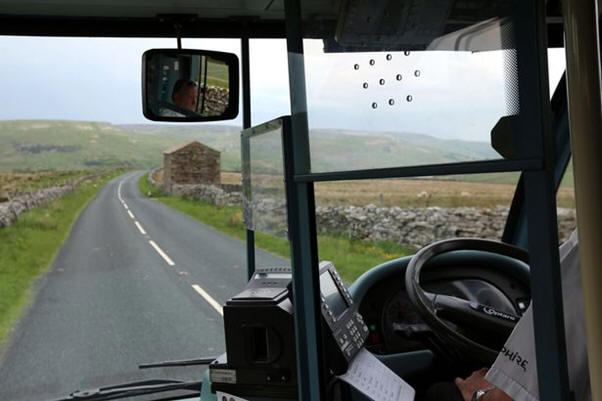 The ‘Northern DalesBus’, as the bus on the route is dubbed, was fixed with special cameras as it travelled on its journey, stretching from the market town of Richmond in North Yorkshire in the east to Ribblehead in the west, snaking across the iconic landscape of the Yorkshire Dales. Filmed in real time, cameras captured the road ahead, the passing scenery and the occasional chatter of the regular passengers.

The 40 mile route is incredibly varied, taking viewers through a blossoming river valley, past ancient meadows, agricultural pastures and ancient mining villages, over high open heathland, and a final stretch across the hilly Dales past the incredible 24-arch Ribblehead viaduct, one of the great engineering achievements of the 19th Century and recently featured in the ITV series "Jericho".

The programme features captions integrated into the landscape to provide details about the dramatic countryside through which the bus is passing - from aspects of the geographical or geological environment, to specific highlights of Britain’s agricultural or industrial heritage, from the ancient stone hay barns that dot the landscape to the scars left behind by the lead mining of previous centuries.

The programme was filmed on the Northern DalesBus which runs from Middlesbrough, Darlington, Richmond, Morecambe, Lancaster and Ingleton every Sunday and Bank Holiday during the summer months as part of the DalesBus network.

You can find out more about the attractions along the route in this Telegraph Travel article: Is this the most beautiful bus route in Britain?.

It is hoped the service will return in Summer 2021 - if you might be interested in sponsoring the service please get in touch with us.

dalestravel.info and dalesbus.org are provided on behalf of Dales and Bowland Community Interest Company.
​Please help support the DalesBus network with a donation via Local Giving.
Please check all information before travelling - no responsibility can be accepted for errors or omissions. Changes may happen without notice​.